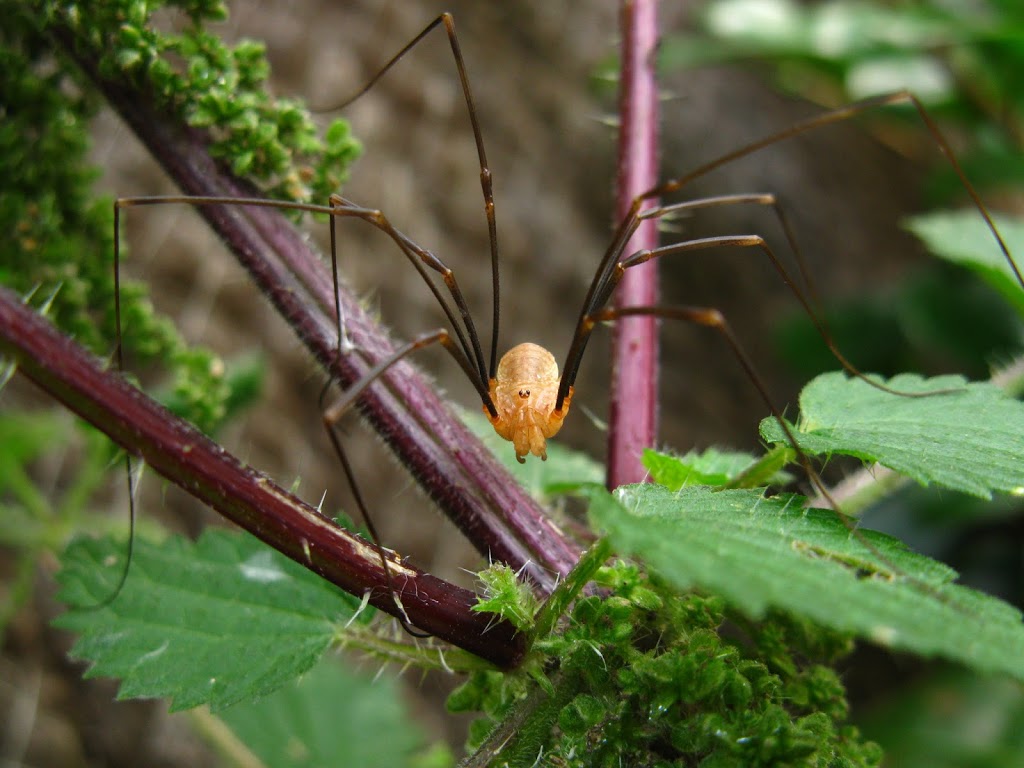 By: faceinthecrowd
In: Arachnida, Biology
Tagged: featured, Opiliones
With: 0 Comments

As promised, here I am posting some more photos and videos taken in my backyard.

I would like to acknowledge already some information about the opiliones I found on the Web:

At the bottom of this post you can find a few more references. Take it with a grain of salt! I am far from being an expert on this matter. I leave you with some general information that I collected from the aforementioned sources (mostly from the book).

Well, first of all keep in mind that opiliones are not harmful to men at all! They are cute and harmless! Great! The Opiliones order are the third-largest group in the arachnids, after the Acari (mites and ticks) and Araneae (spiders). There are a few thousand of different species of opiliones and four suborders (Laniatores, Eupnoi, Dyspnoi and Cyphophthalmi). Apparently they tend to be more active during the night, I guess it explains why I also saw them mostly the end of the day. I’ve read that there is evidence that some species are inefficient in avoiding water loss. It seems that this can be correlated with being more active during the night. Opiliones’ predators can be found among birds, frogs, toads, insectivore mammals and spiders.

Sensory wise… 🙂 They have a pair of eyes (there are some eyeless species), oriented to the side, but they are unable to form images. Opiliones explore the environment using the tips of their second pair of legs that functions like an antenna. I think you can see this behavior in video 1.

Most species are omnivores. Opiliones may eat plants, fungi and small invertebrate. Unlike most arachnids they do not suck their preys’ liquefied tissue. They chew the food by ingestion of small pieces of it. Video 2 has a detail where you can see the opilio using its fangs to cut small particles of the biscuit.

Defensive strategies: Some respond to predator attacks by feigning death (thanatosis). Bobbing, which consists in vibrating the body making hard the identification of the exact location of the body, is also used by many species particularly the ones with long legs. Opiliones can lose one of the legs (autotomy), which continuously keep twitching after it is detached. This is because there are pacemaker neurons located in the femur that become active with any change that breaks the communication between CNS (central nervous system) and these cells (as amputation, damage to the cells…). The twitching has been hypothesized to function as defense mechanism by keeping the attention of a predator while facilitating an escape. In spite of this benefit it also has costs: mobility, foraging abilities and sensory perception can be reduced. [2] The opilion in video 1 has lost two legs on its right side. I suspect that while it is using one of its left leg to check the environment, this ability is reduced on the right.

Opiliones have a pair of prosomatic (anterior to the prosoma or cephalothorax that comprises the head and torax) defensive scent glands (ozopores) that secrete a peculiar smelling fluid when disturbed. This chemical defense seems to be effective in repelling some predators. [3] The great majority of opiliones reproduce sexually (some species reproduce asexually by parthenogenesis).

Interestingly, the opiliones may have been the first group of arthropods to evolve an intromittent organ. Parental care may take many forms: chose of oviposition sites or preparation of nests. Although maternal care is widespread among arachnids, Opiliones are the only order in which some species preserve exclusive parental care.[2]

There is more specific info about the opiliones’ CNS which i would like to understand better and I’ll try to come back to this in the future. Help to identify the species from the photos is most welcome…also to the one in the previous post which seems a short (or shorter) legged one.

[3] http://ecologia.ib.usp.br/opilio/pdf/Machado%20et%20al.%20%282005%29.pdf [#] Another book that looks interesting: Harvestmen: Keys and Notes for the Identification of the Species, By Paul D. Hillyard, John H. P. Sankey http://books.google.ch/books?id=2PcUAAAAIAAJ&printsec=frontcover&source=gbs_ge_summary_r&cad=0#v=onepage&q&f=false [#] http://ecologia.ib.usp.br/opilio/opilio.html