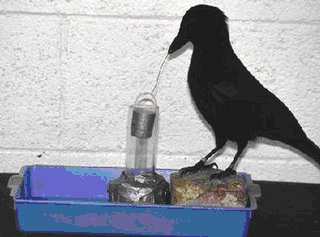 Animal Minds: Minds of their Own

By: faceinthecrowd
In: Aves, Biology, Mammalia
Tagged: Science
With: 1 Comment

Animals are smarter than you think.
By Virginia Morell
National Geographic, March 2008
In 1977 Irene Pepperberg, a recent graduate of Harvard University, did something very bold. At a time when animals still were considered automatons, she set out to find what was on another creature’s mind by talking to it. She brought a one-year-old African gray parrot she named Alex into her lab to teach him to reproduce the sounds of the English language. “I thought if he learned to communicate, I could ask him questions about how he sees the world.”
When Pepperberg began her dialogue with Alex, who died last September at the age of 31, many scientists believed animals were incapable of any thought. They were simply machines, robots programmed to react to stimuli but lacking the ability to think or feel. Any pet owner would disagree. We see the love in our dogs’ eyes and know that, of course, Spot has thoughts and emotions. But such claims remain highly controversial. Gut instinct is not science, and it is all too easy to project human thoughts and feelings onto another creature. How, then, does a scientist prove that an animal is capable of thinking—that it is able to acquire information about the world and act on it?
“That’s why I started my studies with Alex,” Pepperberg said. They were seated—she at her desk, he on top of his cage—in her lab, a windowless room about the size of a boxcar, at Brandeis University. Newspapers lined the floor; baskets of bright toys were stacked on the shelves. They were clearly a team—and because of their work, the notion that animals can think is no longer so fanciful.
Certain skills are considered key signs of higher mental abilities: good memory, a grasp of grammar and symbols, self-awareness, understanding others’ motives, imitating others, and being creative. Bit by bit, in ingenious experiments, researchers have documented these talents in other species, gradually chipping away at what we thought made human beings distinctive while offering a glimpse of where our own abilities came from. Scrub jays know that other jays are thieves and that stashed food can spoil; sheep can recognize faces; chimpanzees use a variety of tools to probe termite mounds and even use weapons to hunt small mammals; dolphins can imitate human postures; the archerfish, which stuns insects with a sudden blast of water, can learn how to aim its squirt simply by watching an experienced fish perform the task. And Alex the parrot turned out to be a surprisingly good talker.

Thirty years after the Alex studies began, Pepperberg and a changing collection of assistants were still giving him English lessons. The humans, along with two younger parrots, also served as Alex’s flock, providing the social input all parrots crave. Like any flock, this one—as small as it was—had its share of drama. Alex dominated his fellow parrots, acted huffy at times around Pepperberg, tolerated the other female humans, and fell to pieces over a male assistant who dropped by for a visit. (“If you were a man,” Pepperberg said, after noting Alex’s aloofness toward me, “he’d be on your shoulder in a second, barfing cashews in your ear.”)
continue…

Betty is a New Caledonia crow.